﻿ Nintendo64EVER - The Nintendo 64 history : launch and success
Not yet a member? Please come register yourself on our new board

The console is eventually released the 23rd June 1996 in Japan, accompanied with 3 games: Pilotwings 64, Saikyo Habu Shogi and Super Mario 64. It sells very well during the first weeks after its launch, being regularly out of stock. The Americans discover the Nintendo 64 on the 19th September 1996, with a lower price than expected of 199$ instead of 250$. In Europe, people have to wait until the 1st March 1997, and even 1st September 1997 in France. The sytem is released at about 150€ to 170€, much cheaper than its competitors.

Even if the system sells well at launch everywhere in the world, sales begin to stagnate by the end of 1997. The PlayStation, which overshadowed the Saturn in a few months, could take advantage of the successive delays of the Nintendo 64 to win the hearts of a large audience. Moreover, SquareSoft announces that they will only develop for Sony. It's a hard blow for Nintendo, ripped from one of their most faithful partner of the Super Famicom era, attracted by Sony's financial support.

In November 1997, Nintendo organize their traditional Space World and show new major upcoming titles for the Nintendo 64, among which The Legend of Zelda: Ocarina of Time, F-Zero 64, 1080° Snowboarding, Yoshi's Island 64, ... But the peak of the event is the presentation of the optical disk drive, named 64DD (for Disk Drive). It will be connected under the Nintendo 64 through the EXT port and will host discs with a 64MB capacity (where bigger cartridges only had a 32MB capacity). A game would be able to be stored on severa discs and information exchange would be possible between some games (for example, creating a character in Mario Artist and use it in another compatible game). Many third party publishers announce their support to the system and we already hear about new versions of Mario and Zelda. The 64DD release is scheduled for 1998.

In the meanwhile, Rareware, freshly acquired by Nintendo, is building their reputation as master pieces makers, releasing high quality games such as Goldeneye 007 and Banjo Kazooie. Nintendo releases the first game to involve "physical sensations" by the end of the year: Starfox 64 (Lylat Wars in Europe), Starwing's sequel, sold bundled with the Rumble Pak. This accessory, once plugged in the N64 controller, makes it vibrate according to the context (when being shot, hurting a wall, ...). 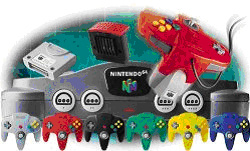 During 1998, games releases are being scarce, especially in comparison with the number of games released for the PlayStation. Even if the lambda consumer was a little bit confused by the multitude of PlayStation games to find the best ones among a huge pack of craps, its library of more than 300 games is enough to attract players more than the less than 100 games available on the Nintendo 64. Console sales are not as high as expected, despite very good games sales (the N64 will end up with one of the best ratio of games bought by system, as well as more than fifty Million Sellers). But on the 11th December 1998, comes in Europe the game everybody was waiting as the messiah, The Legend of Zelda: Ocarina of Time! Three years of waiting, many delays, but the game was worth it. It beats every sales record with more than 6 millions of copies sold in the first two weekes! It also becomes the first game to receive the perfect notation, 40/40, in the famous Japanese magazine Famitsu and will become the best rated game of all times in the whole world. Still today, this game is considered as a master piece and seen as one of the best games ever released.