﻿ Nintendo64EVER - The Nintendo 64 history : announces
Not yet a member? Please come register yourself on our new board

In May 1994, Hiroshi Yamauchi, Nintendo President, declares that Nintendo is gonna jump a technology generation and produce a true 64-bits instead of the, according to his words, "already obsolete 32-bits". The console is therefore renamed Nintendo Ultra 64. Nonetheless, Yamauchi surprises everybody when he announces that the Ultra 64 will use cartridges insted of CD-ROM as game support. According to him, players want fast-paced games and the CD-ROM, because of its loading times, can't provide this game reactivity. At the opposite, the cartridge support has barely to no loading times during data reading, allowing the games to be much faster and preventing the players to wait during gameplay. To say the truth, if Nintendo sticks on cartridges, it's also to keep control on the full manufacturing process and earn royalties on every sold cartridge instead of solely consoles, as they've been doing since the Famicom era.

This announce freezes several developers, who don't want to work on cartridges anymore, these giving not enough storage space for their games. At that time, the only development studios supporting Nintendo are Rareware, DMA Design, Midway and Acclaim. They'll be joined later by Electronic Arts, LucasArts and, in during a time, SquareSoft who will eventually leave Nintendo to work only on the PlayStation.

During Summer '94, Nintendo reveals the first visual prototype of the system. Black and curvy, its look marks a clear difference from the previous Nintendo systems but, what impresses and surprises people the most, is the presence of four controller slots on the front. The controller itself is not displayed because it was not ready at that time but is announced as "revolutionary". A first estimated release date is set : end of 1995. Still one year and a half of patience... 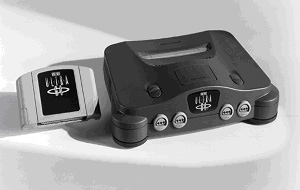 The first Nintendo 64 visual, still called Ultra 64 at that time.

In November 1994, the PlayStation and the Saturn are launched in Japan. Nintendo, over confident of their future success, shouts loud that when the Nintendo 64 is released, those 32-bits system will be considered relics from the past! Shigeru Miyamoto announces the development of a new revolutionary title developed in collaboration with Paradigm Entertainment, the developers of US Air Force flight simulators, without giving more details

By the end of the year, Nintendo announces that the technolog of their upcoming console will also be used to create a brand new arcade card and unveils a racing game developed by Midway (Cruis'n USA) and a fighting game developed by Rareware (Killer Instinct Gold). This Ultra 64 arcade card and these two games are released in the course of 1995 but only Killer Instinct Gold receives good praise from the public. Beyond these two titles, no other game will be developed for this system.

In January 1995, SGI declares that Ultra 64's core processor is finalized and unveils the technical details of the console. Even if it is way more powerful than its competitors, with a 93.75MHz processor, it's far from equalling the SGI workstations. The launch price is well confirmed to be 250US dollars all over the world.

During E3 1995, Nintendo delays the release of their console to April 1996 in Japan, without giving any date for the rest of the world. This comes at the worst moment possible as Sega and Sony are both about to release their machine in the upcoming weeks in Europe and in the USA. Moreover, Sony announces that their PlayStation will be sold at only 300US dollars instead of the expected 500. 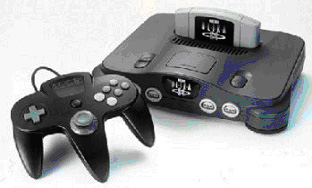 The first Nintendo 64 public prototype, the control stick is larger and the buttons aren't coloured.

Finally, the console is shown in a playable version on the 24th Novembre 1995 at the Shoshinkai (Space World). Nintendo impresses everybody, especially with the playable demos of Super Mario 64 and Kirby's Air Ride, the latest being eventually cancelled and released 8 years later on the GameCube. A few other games are introduced in videos, such as Pilotwings (Paradigm's secret project), Starfox 64, Mario Kart R (later renamed Mario Kart 64), a fighting scene between Link and an armoured knight and also a turn-by-turn fighting scene in 3D with characters from Final Fantasy VI! But what attracts the most attention is the controller, which reveals itself to really be revolutionary! Offering three different grip positions and an analog control stick in the center facilitating movements in three dimensional environements, four buttons originally dedicated to the camera management (they'll be used for other purposes by many games later on), it has everything to please gamers. In the same time, Hiroshi Yamauchi announces that an external disc drive is in development, to compensate the lack of memory space of the cartridges. The Nintendo Ultra 64 release date is set on the 21st April 1996 in Japan, for 25000 yens (around 180€ at that time).

In Europe, everybody remembers the very aggressive advertising campaign during Christmas time in 1995, with ads showing a picture of the Ultra 64 with slogans like "Wait for it..." and "Is it worth the wait? Only if you want the best!". With this campaign and the soon-to-be-released Saturn and PlayStation (both released in November 1995 in Europe), Nintendo tries not to lose face in front of the players. 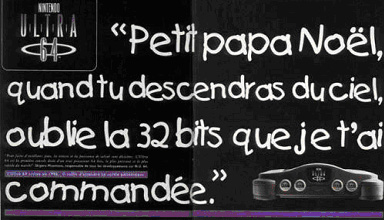 An example of a French advertising before Christmas '95.

Early February 1996, Nintendo renames their system once again. This time, it will be Nintendo 64 everywhere in the world. This change of name comes with another delay, the console being announced for the 23rd June 1996 in Japan and for Christmas in Europe and the USA.